After reading and loving Hot Hot Roti for Dada-ji by F. Zia and illustrated by Ken Min, I wanted to interview both debut artist. Hannah Ehrlich and Lucy Amon from Lee and Low Books were kind enough to make that happen. Lee and Low is having a great sale for the month of May. All books are 25% off free standard USPS on all orders just over $10. 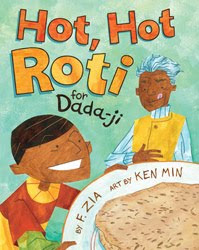 Hi Ken, Congratulations on a wonderful debut. Can you tell us a little about yourself?

I was born and raised in Los Angeles, CA and studied illustration at Art Center, College of Design. I have a background in storyboarding- having worked on some animated projects and for various commercial houses- but my true love is definitely illustrating. Working on a picture book has been a goal of mine for a very long time now and I'm grateful to Lee & Low for the opportunity to work on my first one.

It's very rare for author's and illustrators to have contact while working on a project. Though its not often they debut at the same time. Did you two exchange emails?

Well, the general rule of thumb is that the author and illustrator don't usually communicate with one another, but now that the book is out, I guess we can mention that we did indeed break that rule. Granted, Ms. Zia was aware about the 'no communication' policy that most publishers have, but she just wanted to drop a note to say hello. I, in return, understood where she was coming from and I also wanted to let her know that I was going to treat her story with all the respect, attention and dedication I could muster.

Hot Hot Roti for Dada-ji is the blending of two cultures. Making the story backdrop as essential as the two main characters, Aneel and his grandfather. Was there a particular character or scene you worked around first?

For my part, I did a lot of character design work initially. It helps to 'see' who they are and what they are about visually. Since Aneel and Dada-ji are the main characters, they were my primary focus. From there, the rest of the family came together nicely. Being a family, I wanted visual traits to carry from one to another. 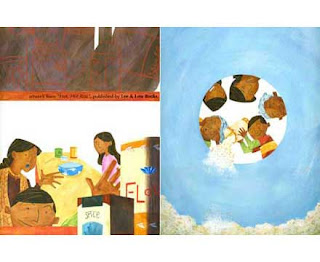 As for starting with a scene, I really just went through from the beginning of the story and jotted down ideas for images. Sometimes I had a picture in mind, other times I skipped over parts to follow up later. It's a bit like a puzzle. Sometimes you'll work on the corner over here and then work on the face over there; going back and forth. Then, as you complete more and more sections, the entire image comes into focus, or, in this case, a picture book.

Have you had the opportunity to read Hot, Hot Roti for Dada-ji to a group of kids yet? If so what has the response been?

No, not yet. It's something I'm curious about doing and also mildly afraid of trying. I like kids, but not so good speaking and standing up in front of crowds. Oh, the conundrum!

The art work is beautiful. I love your use of color. Can you tell us a little about the style?

I work mainly in acrylics and color pencils. Textures always fascinated me so I rarely ever just put down a straight, flat color. Most times, I'll layer in colors till I get something I like. (This is where working in acrylics is so helpful, since one can paint right on top of the existing paint.) If one wants to talk about influences, it would have to start with Ezra Jack Keats.

I was in a bookstore when I came across his book, The Snowy Day. I remember how much I liked that title as a child for its colorful, clean edge shapes. And just flipping through it then, triggered an idea of how I might approach painting. Of course one can't talk about textures and colors without also referencing Eric Carle, Alice & Martin Provensen and Charley Harper. So, really, a lot of people had a part in this style.

How much different is the finished illustrations from the first drafts?

Well, certainly with any project, one goes through a series of sketches trying to find a layout or composition that best reflects the text. It's probably the most important aspect of the process and the most time consuming just in terms of wanting to get it right. Certainly a lot of discussion went on going back and forth with my art director and editor, but we're all after the same goal- getting the most narrative and fun images we can come up with for each piece of text. 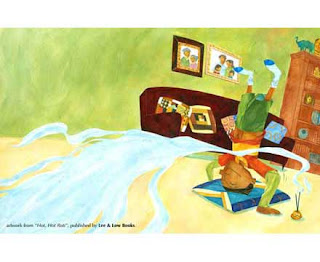 Some images I came upon really quickly, some needed to be worked on and revised. The nice thing about book illustrations is that one has the time to let things marinate for a spell to try and bring out one's best work. Once the composition is working, the actual painting part can move about relatively smoothly. It's like building a house, once you have the foundation set, the rest is very straightforward.

Did you try roti and mango pickle? If so what did you think?

I think the phrase, "It's like a party in one's mouth" comes to mind.

Ken, thanks so much for your time. I look forward to seeing more of your work in the future.

This book looks so cute! Thanks so much for featuring it. (And I can vouch for the fact that mango pickle is like a party in your mouth...)

Nice interview, this looks like a cute book. Thanks for sharing some of the fun illustrations. And I have to say that I love Eric Carle as well.

-Let's Get Beyond Tolerance