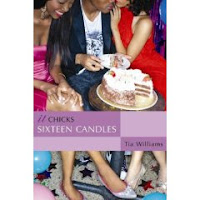 Sixteen Candles by Tia Williams
This is the second book in It Chicks series. I really liked, the first one and was very excited when I saw Sixteen Candles on the new release cart last week. I got the last copy yesterday. This made me very happy for two reasons 1) its selling by itself (I only sold one) and 2)I don't have to wait for more copies to come in. These books are filled with some serious page turning drama. I wouldn't expect anything less from teenagers attending a performance arts high school.
The It Chicks are made up of four girls. Skye a drama major, who is always upstaged by her talented older sister and mother. Tangie a badazz dancer with a ghetto booty. Skye and Tangie have been friends since grade school. Kamillah a drama major from the Bronx who don't take no shit. Regina the film major who plans on doing a documentary on her high school years. They attend Louis Armstrong Academy of Performing and Creative Arts. The book begins with Syke trying to quickly make amends with her friends. Her 16th birthday party will air on Music Video Network (MVN) for their Sixteen Candles reality show, so Skye needs to have friends by her side. In the first book Tia Williams juggled a lot of characters but I thought she did a good job. The author has trimmed down the characters in Sixteen Candles. Though I seriously missed the Regina and Nick scenes they where so much fun together. With less characters and more focus the writing was stronger.
As much as I enjoyed Sixteen Candles I am still wondering what happened to Spotlight tryouts? A spotlight performance is coveted at Louis Armstrong only a few students from each major and class are selected to perform. In the second chapter we find out Tangie is preparing a dance number for Spotlight tryouts. She is called upon in Street funk class to show the routine. Tangie is nervous but ends up killing it. The author does a great job of describing Tangie's dancing. So I was looking forward to the Spotlight tryouts. Unfortunately it's only mentioned a few more times. (with no dancing) I understand its all about Skye's party I only wish the author would've fit in the tryouts or eluded to it more for the next book. It seems like they were forgotten, which is a shame because spotlight auditions had some serious scene potential. Even with that bump in the reading road, I highly recommend the It Chick series.
I will share 3 very from parts from Sixteen Candles so you'll know its worth it to add these books to your tbr list.

All the students must meet with their guidance counselors weekly for Self Awareness Sessions where they are free to say anything. Its to help them channel their emotions for artistic gain. Enough background scene

Skye's mother Alexa Carmicheal starred in a famous 1980's soap opera. She has been known to drink too much. Skye her sister, Eden and mother are picking male models. Enough background scene
"Kenny, if I was half my age I'd make love to you for three days straight and happily bear your mulatto love child."

No background needed scene
"Look at Ciara folks think she's a damned transvestite, okay? And She's out their doing her thing. So don't trip."

If you're a chick lit fan you should really check out the It Chicks series. They are very entertaining and laugh out loud funny. I love that the It Chicks are black. (It Chicks come in all shades) The author doesn't try too prove their blackness they just are who they are, one of the many cliques in a very competitive and diverse performing arts high school.
Posted by Doret at 12:51 AM

i just got the book of of amazon and your right, i'm an official die hard fan!!!!!