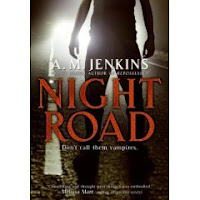 Night Road by A. M. Jenkins
I was very excited when I heard Jenkins had a new book coming out. There are a lot of teen vampire novels out. Though don't mistake Night Road for one. There are no vampires only hemes. They can't die, must avoid the sun and need blood like omnis need oxygen. Night Road opens with Cole, a veteran heme in an 18yr old body making his way to New York. He was called by Johnny,who is a sort of father figure for the hemes in the United States. Johnny created the Building a safehaven for hemes. Cole arrives to find a new heme was accidentally created. Gordon, a former 18yr old college student is now a heme.

Johnny has asked Cole to take Gordon on the road with Sandor, another veteran heme. The Cole is the more serious one, constantly grilling Gordon with new information. Sandor a traveling heme as well is there to keep things light. I really liked Sandor.
The beginning of Night Road, has an almost midway feel to it.

"Cole did have a map in his backpack. He'd studied it back at the parking garage. Only now that he was that he was already on the subway did it occur to him that it might be outdated"

Sometimes I like being thrown right into the story. For me to enjoy a book I must find rhythm of the writer. Jenkins makes me work for it and I like that plus its always worth it. Jenkins has created a different kind of coming of age story with Night Road. We follow along as the two veteran hemes with complementary personalities teach the new heme, Cole the basics of who is he is becoming.

"You had no idea what was happening to you. Now you are starting to understand. And you dont have to deal with it alone. Sandor and I are here and our job is to keep you safe until you become familiar with your new limitations. Which I might add are the exact same limitations the rest of us have."

If only we all were as lucky as Gordon. The end came too quickly, but I have much respect for an author who leaves me wanting more. I highly recommend Night Road. Its on sale now. Though if you're looking for something in paperback check out Jenkin's adward winning novel Repossessed.
Posted by Doret at 8:38 PM