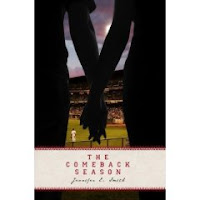 The Comeback Season by Jennifer E. Smith. If I knew I was going to enjoy this as much as I did, would've read it two months ago as planned. Towards the end, I thought, The Comeback Season is as good as it is because Smith doesn't try to make it anymore then what its suppose to be.
Ryan Walsh is going to opening day at Wrigley Field. Ryan's dad taught her to love the Cubs. In his honor Ryan decides to go to opening day.
Ryan is trying to find her place again. Ryan misses her dad too much, to give her stepfather a chance. When high school started somehow Ryan ends up on the short end of the friend stick.
Ryan runs into Nick, a sophomore from her freshman math class. Ticketless, the two sit outside Wrigley Field. Smith made me a believer in Ryan and Nick's relationship. In the beginning its slow and unfamiliar, the two sticking to common ground the Cubs. Both are going through personal situations so there is no pushing for more.

"I could never really play baseball as a kid. he says, winding up with the exaggerated motion of a pitcher on the mound. I was always getting hurt or breaking something. It took forever to figure out why, and when we did I was always in the middle of some treatment or another. This is the most she heard him talk about his past since he first told her about it, and Ryan wishes she could see his face. They fall into a rhythm with the ball, the back and forth motion like something choreographed."


Its okay if the Cubs never win again, if only he would just be okay.

If Ryan was thinking she never would've made it, its too heavy. In the second half of the season the Cubs go on a run. They have a shot at the wild card and Nick is in the hospital. Ryan thinks her bargain is responsible for Nick's relapse. Being the superstitious baseball fan that I am, I understand her guilt completely. This year when my team is the Sunday night game, I won't watch because they lose. I believe that with all of my baseball loving heart. They have a 3-1 record. One Sunday I checked the score online they were up four runs, I still refused to turn to the game. Baseball fans take there bargains and promises very seriously.
Ryan is angry and too scared to cheer for the Cubs. When she's with Nick he needs Ryan to cheer. Eventually Ryan tells Nicks about the bargain. Nick eases Ryan's guilt, she's free to cheer again.
Smith has given us a regular girl in transition. That's one of the reasons I loved The Comeback Season. Ryan is an average student who misses her dad, and wants a seat in the chaotic place aka a high school cafeteria. I think a lot of people could relate. At times Smith's word choice was beautiful, I had no choice but to reread a sentence or two.

"This silence between them is not anything like the others. It's not pleasant or awkward, not trying or simple. Even now five years later it seems somehow determined to last, as if it might be this way always the two of them out on the stoop each doing their best not to drift too far. It occurs to Ryan that if there really are all sorts of silences then maybe death is nothing more then the longest of these and this nothing more then the empty space left behind by her father"

Guys will enjoy The Comeback Season just as much. Its not only the baseball aspect though that helps. There is also great emotional balance. Ryan is not the type of girl who likes to talk too much but she's not afraid to share her feelings.
Sometimes I get customers looking for a book club selection for a guy/girl book group. Now I have something I can highly recommend.
Posted by Doret at 5:40 PM

This one looks good, Doret! Thanks for the review :)