Amy Hodgepodge All Mixed Up 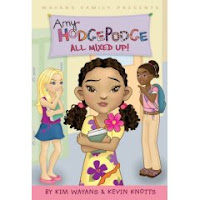 Amy Hodgepodge by Kim Wayans & Kevin Knotts. The Hodges have moved to a new city. Amy will be starting the forth grade. This will be Amy's first time going to school, she was homeschooled prior to the move. Amy has all the regular new school feelings, such as will the kids like me and I can't wait to make friends. A lot of kids could probably relate to the homeschooled to school transition. Amy is restless the first day at her desk. She's not used to being inside while learning. Amy explains what a day of homeschool learning entailed. When kids were being mean to Amy, she has no idea why. I normally question when kids don't know why they're being teased, some kids are just nasty, mean, insecure bullies. Though if you've been homeschooled you may not know this. The two teasers were Liza and Jennifer. Liza was assigned to show Amy around. This I found a little hard to believe. Teachers usually know who the mean students are, so why pick Liza to show Amy around. In class Liza and Jennifer make fun of Amy's dress. By lunch time Amy is still friendless and feeling a little over dressed. The chaotic scene of the lunchroom is described very well. Amy is saved from having to eat in the classroom by Lola. A very nice girl who compliments Amy's singing and invites her to sit at her table. Lola's table consists of five people including her twin brother Cole. Of course Liza and Jennifer are not faraway. They whisper speak, the new girl looks kind of weird. What is she anyway. They tease Amy because she is from a multiracial family. Amy is Caucasian, African American and Asian. Amy is upset by their comments, it hurts to be teased about who you are. The kids at the table tell Amy to ignore Liza and Jennifer. They are all from multiracial families and have been teased by Liza and Jennifer. I found it a little hard to believe Amy sat at a table with all multiracial kids. Amy is quickly accepted into the group. The school will be having a talent show next week. Amy and her friends decide to sing Celebrate You and Me. A student from India sang a traditional song in Hindi. Another student did a poem about helping families who had lost their homes to a hurricane.
Amy Hodgepodge was like Shrek 3 to me. Too many life lessons and morals. They stopped the story from reaching its full potential. Then again I am a jaded adult, maybe kids will be inspired. Though, I think its enough to expose a child to different people and experiences, the message of acceptance will come naturally. We need more multiracial characters for all ages, Amy Hodge and her friends are a welcome edition. I only hope as the series continues the authors will allow the stories that are screaming to get out, out.
Posted by Doret at 9:16 PM