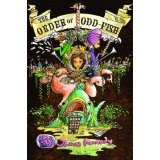 Order of the Odd Fish by James Kennedy

This book will be coming out in paperback on Feb. 9. I read it when it first came out in hardcover and absolutely loved it. My review It was just the right about of strange for me, beginning with the eye catching cover.

The author James Kennedy recieves Fan Art based off the novel. It takes a special book to inspire creativity. I love the Stained Glass Sefino. 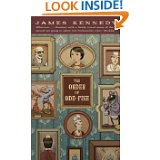 Kennedy is currently calling for submissions for art inspired by the Order of the Odd Fish for a gallery show in Chicago next spring. The deadline is March 15

The author sent me an email asking if I could mention this. My initial thought was of course because I loved Order of the Odd Fish. So I am more than happy to especially since Kennedy doesn't have to do this.

He could simply show the fan art on this blog, send out a few thanks and be done with it. Though Kennedy is as committed to his fans as his fans are to his book.

Artists like these deserve broader recognition. So this spring I’m planning an extravaganza of Odd-Fish fan art in Chicago! It'll be not only an art show, but also a costumed dance party and theatrical extravaganza. I'm working with a Chicago theater group called Collaboraction to do this. They're going to decorate their cavernous space to portray scenes from the book (the fantastical tropical metropolis of Eldritch City, the digestive system of the All-Devouring Mother goddess, the Dome of Doom, etc.).

Opening night will be a dance party where people dress up as gods and do battle-dancing in the Dome of Doom. In the weeks afterward, we'll bring in field trips from schools. They'll browse the fan art galleries, be wowed by the elaborately decorated environment we've created, take in some performances from the book, and participate in an energetic writing workshop.The whole shebang will open next April

Order of the Odd Fish is well worth the read, art or no art but do spread the word.
Posted by Doret at 4:59 PM