Initially I had planned to look a few months ahead. Every time I found a new book by a author of color or with characters of color, it got extended another month. I have noted a few paperback releases . I have reviewed a few of the books in January, and will link to those. So I don't look vein, I've decided to link to other early reviews or excerpts. Like my blog this list isn't exclusively books featuring characters of color. It's simply books I think I will enjoy and in many cases know that to be the truth.

Before I get to January, I want to point out a recent release (November) for a small publishing house Holiday House that looks really good Celia's Robot by Margaret Chang. Celia is in the fifth. She is half Chinese and half White. Her dad builds her robot to keep on task I read the excerpt and loved it. Celia is a protagonist that I can get behind.

Also check out a wonderful recent Library Journal list by Martha Cornog of 24 Graphic Novels for children and teens with African American characters.

Bleeding Violet by Dia Reeves (D)
By The Time You Read This, I'll Be Dead by Julie Anne Peters
13 Treasures by Michelle Harrison (D)
Sweet, Hereafter by Angela Johnson (S)
Freefall by Ariela Anhalt (D)
Good Fortune by Noni Carter (D)
The Good Girl's Guide to Getting Kidnapped by Yxta Maya Murray
Time You Let Me In: 25 Poets under 25 by Naomi Shihab Nye
Some Girls Are by Courtney Summers
Night Road by A. M. Jenkins (QP)
The Missing Girl by Norma Fox Mazer (QP)
Mexican WhiteBoy by Matt de la Pena (QP)
Standing Against the Wind by Traci L. Jones (QP)

The Boys by Jeff Newman

A Nest for Celeste byHenry Cole

Cloud Tea Monkeys by Mal Peet and Elspeth Graham illus. by Juan Wijngaard
My Shoes and I by Rene Colato Lainez illus. by Fabricio Vanden
No Easy Way: The Story of Ted Williams and the Last .400 Season by Fred Bowen

A Wish After Midnight by Zetta Elliott reviews the cover looks even better in person
Finnkin of the Rock by Melina Marchetta
Scarlett Fever by Maureen Johnson (S) A booksheleves of doom review
You Don't Even Know Me: Stories and Poems About Boys by Sharon Flake
Lockdown by Walter Dean Myers
Heist Society by Ally Carter
Fiction

The Hundred Thousand Kingdoms by N.K. Jemisin (S, D) This is fantasy fiction but the protagonist is 19. I think it will work will for older teens. my reivew @ color online

Ling and Ting by Grace Lin

Roy Morelli Steps Up to the Plate by Thatcher Heldring
Take Me with You by Carolyn Marsden
Out of My Mind by Sharon M. Draper
Falling In by Frances O'Roark Dowell
The Celestial Globe by Marie Rutkoski (S)
Six Innings by James Preller (QP)

The Weed That Strings the Hangman's Bag: A Flavia de Luce Mystery by Alan Bradley (S) This is classified as an adult mystery. Flavia de Luce is 11 with a passion for chemistry. Its perfectly fine (and so much fun) for middle grade up. no review found but read an excerpt

Around Our Way by Tameka Fryer Brown (D)
Chavela and the Magic Bubble by Monica Brown and Magaly Morales
Clemente by Willie Perdomo illus. by Bryan Collier 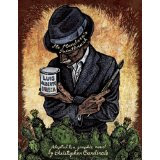 The Red Umbrella by Christina Gonzalez
Tortilla Sun by Jennifer Cervantes
I So Don't Do Makeup by Barrie Summy
The Magic Thief: Lost by Sarah Prineas
A Most Improper Magick by Stephanie Burgis
The Boneshaker by Kate Milford illus. by Andrea Offermann
Blimpo: The Third Circle of Heck by Dale Bayse (S)
Saltypie: A Choctaw Journey from Darkness into Light by Tim Tingle

Shooting Kabul by N. H. Senzai (D)
The Other Half of My Heart by Sundee T. Frazier
Tall Story by Candy Gourlay (D) author interview @ Asia in the Heart, World on my Mind
They Called Themselves the K.K.K.: by Susan Campbell Bartoletti (NF)

My Havana: Memories of a Cuban Boyhood by Rosemary Wells and Secundino Fernandez illus. by Peter Ferguso

The Wonder of Charlie Anne by Kimberly Fusco

I just so happen to be reading a book where the main character is African-American. It's called The Adventurous Deeds of Deadwood Jones by Helen Hemphill. Came out in 2007, and I'm going to review it on my blog soon.

I have to say I'm right there with you in terms of books with characters of color being at a disadvantage, or maybe I just wasn't looking hard enough. I've found quite a few interesting titles while checking out book blogs this week. Sadly, most were news to me.

This is an amazing list! Thanks so much for doing all this hard work. I have requests out for several of these but I'm psyched to see several others. Awesome stuff!

(Also - just as an aside, I have a book on Hank Aaron by Matt Tavares and Jackie Robinson by his daughter Sharon and then i see all the others you have listed as well. It's serious baseball loving in kidlit this year!)

well this is a list i'm very happy to part of! and this must have taken a lot of effort. thanks so much - what a service!

Fabulous list! Thanks for putting so much time and effort into something that all of us need to be more aware of.

Thanks for pulling all this together, Doret! (Although I keep trying to make my TBR list shorter, I don't think I'm going to succeed.)

YES YES YES! I love this list, Doret you're AMAZING :) I'll be sharing ths link on otmorrow's post and updating my blog later on and adding to my tbr pile.

Thanks for the bounty of recommendations - many to be added to my TBR list!

Leslie @ This is the Refrain said...

This is such an amazing resource and I'm absolutely adding a number of these titles to my TBR. You're awesome!

Woah, rocking list! I can't even imagine how long it must have took you to put it together. Totally bookmarking this post. =D

I just have to believe you are making all this up, because I surely do never see any such books in my bookstore or library! It just MAKES ME WANNA HOLLER!!!

But I'll take it on faith that somewhere in the world these books have been published, and the lists look great, like your other lists!

I'm back to sigh with happiness over this list! It gives me hope :) Also I gave you an award (not sure if you post these, but your blog makes me happy, especially this post)

I love this list, and I love the way you included both writers of color and white writers, noting the difference with, ha, color. There are so many books on this list I'm looking forward to--esp One Crazy Summer, which I've heard Rita read. It's hilarious but makes you tear up, too.

Awesome awesome list!!! Thank you soooo much for doing this. I saw many listed that I hadn't seen before and they sound fantastic. I will be bookmarking this and using it over and over.

If the books are as good as some of these covers it's going to be a very good reading year.

Doret, you're freakin' awesome. You know that, right?

Such an impressive list...so glad to be included. Thank you for spreading the word. These look to be some seriously fine books!

Fabulous, comprehensive list! Thanks also for the link to the list of graphic novels with African-American protagonists--very cool.

I'm still hoping my novel will come out in April or thereabouts, but I don't have final info yet...but it will definitely have protagonists of color (the narrator is half South Asian...like me!). I don't have any real info to provide yet, though. And, of course, dates tend to change...sigh.

Thank you so much. This is a wonderful list.I am always digging around the bookstores and libaries in search of books with brown faces. It is so nice to have a great, extensive list to work with.

Thank Maude for you!

I will be on my JOB with your post at Color Online asap.