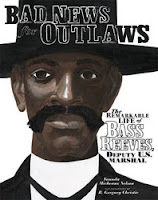 Bad News for OutLaws by Vaunda Micheaux Nelson,
illus. by R. Gregory Christie
Bad News for Out Laws is the remarkable story of Bass Reeves, Deputy U.S. Marshal. Reeves was born into slavey in 1838. In 1860's he escaped to Indian Territory, living there until 1874. I love that this book talks about the relationship between Native Americans and African Americans during slavery times. In 1875 Reeves is hired as U.S. Marshall to work the Indian territory which was over run with out laws. Reeves was a quick shot familiar with the area, and the perfect man for the job. Usually I start with the text but since this is a graphic novel, I will change it up a bit, and begin with artwork. The first time we see Deputy Reeves, he' s chasing an outlaw on horseback. Desperate to escape the outlaw jumps into a store window. Christie's artwork is alive on the page. Its the small details I noticed and loved. Reeves bracing down on his horse getting ready to make the capture. The outlaw covering his face from flying glass and wood panel. Steeped in earth tones, the reader easily gets the feel of the old West. In the podcast interview Christie said he only had one photo of Bass Reeves to work with. That must have been one great photograph. Anyone of Christie's art panels I could see hanging in a museum. I started with the illus. but in no way is the text lacking. Nelson does a wonderful job of detailing Bass Reeves life. Nelson places Reeves life into three key periods. Slave Days, Freedom and Family (life on the Indian territory) and Deputy U.S. Marshall . I love the tone and feel of the words.

"Bass was blazing fast on the draw and as good with his left hand as with his right. He would say he was“only fair” with a rifle. But Bass was such a crack shot,he was barred from turkey shoots at picnics and fairs.He always won. One sharpshooter said when Bassstood firm and took careful aim, “he could shoot the lefthind leg off a contented fly sitting on a mule’s ear at ahundred yards and never ruffle a hair.”

I am always amazed by how much information authors can fit into a children's biography without cramming the pages too tight. Nelson does exactly that, and she is not dependent on the afterword to fill in gaps. The afterword simply gives the reader more. Vaunda Micheaux Nelson and R. Gregory Christie have created a wonderful biography on Bass Reeves. A great edition to any library.
Christie's Podcast interview
Look Inside due checkout the back cover
Posted by Doret at 10:50 PM

Hey, Doret,
Since you visited my little blogger spot, I had to come see where you *live*. I saw your review of Vaunda Nelson's book - I personally know Vaunda (we live just a town apart from each other in NM). She's a total sweetheart - and did you know that she's been on the Newbery committee twice over the years? She is so talented.
;-D

Kimberley thanks for visiting and for the tidbit, I love those.