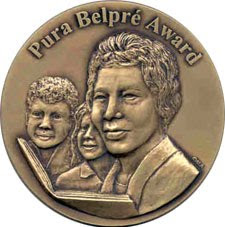 On Jan. 23 the Youth Media Awards will be given out. I've already looked at the CSK award and to do that and not the Pura Belpre Award es no bueno.

The award is named after Pura Belpré, the first Latina librarian at the New York Public Library. The Pura Belpré Award, established in 1996, is presented annually to a Latino/Latina writer and illustrator whose work best portrays, affirms, and celebrates the Latino cultural experience in an outstanding work of literature for children and youth. It is co-sponsored by the Association for Library Service to Children (ALSC), a division of the American Library Association (ALA), and REFORMA, the National Association to Promote Library and Information Services to Latinos and the Spanish-Speaking, an ALA affiliate.

I think I've found all the eligible picture books for illustrator award but then I thought the same thing for the CSK award and missed three books. Lo siento if I do the same thing here. I've read four out of the nine. For the rest I had to make do with online excerpts and spreads.

A Bailer ! Lets Dance is one of the ones I didn't read. Since it didn't get a good kirkus review I will place this in the non contender pile.

Adelita and the Veggie Cousins - didn't read this either however the cover art isn't working for me.

Clara and the Curandera for this one I was able to look at a few spreads via Thelma Muraida, the illustrators site and really enjoyed what I saw. Especially when Clara smells the flowers.

Talking Eagle and the Lady Roses - Again I had to make do with spreads and I liked what I saw and Cordova was an honor recipient in 2009 for What Can You Do With A Rebozo?

Tia Isa Wants a Car - (I knew I'd forgot one) Only saw a little of this one as well but liked what I saw. The illus. have a clean straight forward look and Munoz color palette is very nice. I would not be surprised to see this one get an honor.

Marisol McDonald Doesn't Match this is the last one I haven't read promise. Though I love the spreads I saw via Sara Palacios, the illustrators site. Marisol is adorable with her little eye patch.

Diego Rivera: His World and Ours - Tonatiuh style is such that either you like it or you don't. I happen to like it a lot. Last years committee did as well, his debut Dear Primo was an illustrator honor recipient. The illus. of Diego Rivera are very much the same as his debut. Overall I like this one more.

Waiting for Biblioburro - Parra's illustrations are beautiful and each time I look at them I like them even more. They fit Brown's text perfectly

Ladder to the Moon - Morales illustrations are gorgeous, I could easily enjoy this story without reading a word. Though according to the rules of the award books must portray, affirm, and celebrate the Latino cultural experience and Ladder to the Moon doesn't do that. It does however encourage cultural unity and that should count for something. Since it's illlustrated by an artist who is a past winner, I believe the committee will at least look at it. If its eliagble or not, yo no se

The Cazuela That the Farm Maiden Stirred - Lopez loves color and knows how to use it. The bright and beautiful illustrations pop off the page.

In the end I believe who will win is between Parra, Morales and Lopez. Since Ladder to the Moon may or may not fit the criteria, it comes down to a two way push between Parra and Lopez (in my head I am picturing the two artist in a ring with a canvas and their medium of choice)

That was muy dificil and I totally chickened out, but it really is a coin toss.

Who I think will honor - Palacios for Marisol Mcdonald Doesn't Match, Muraida for Clara and the Curandera, Lopez or Parra,

Who I want to honor - Lopez or Parra, Tonatiuh for Diego Rivera, Palacios, Morales for Ladder to the Moon
Posted by Doret at 9:00 AM

I'm going with Waiting for Biblioburro :)

I sadly haven't read any of these. I didn't read many picture books this week. I'm hoping I fare better with the author awards!

Loved the illustrations for "Ladder to the Moon" and would be happy to see it win something. The story was not very story like and I found myself tuning out as I read it. I appreciated the message, but found it difficult to relate to.

Joanna - I should've picked just one but I couldn't

Motherreader - I'd be happy to see Morales recoginzed for the Ladder to the Moon illus. as well.

Thanks so much for highlighting the Pura Belpre Award, Doret--I don't think it ever gets enough attention--or love :) I like Marisol, Biblioburro, and Cazuela best, too!