When I started reading Jasmine Richards, middle grade fantasy novel, The Books of Wonders I couldn't put it down. My review and you can read the first seven chapters, here but first please enjoy this interview with the author which I jumped at the chance to do.

Hi Jasmine, can you tell us a little about yourself and The Book of Wonders?

I am 30 years old and currently live in Oxfordshire although I grew up in London. I work at Oxford University Press as a senior commissioning editor which means, besides other things, I get to read books all the time. When I was little I always had my nose in a book . So I still can’t believe that I’ve found a job where I get paid to work with stories all day long.

My story addiction doesn’t end there, in the evening I am busy writing novels and The Book of Wonders is my first one.

Since the Books of Wonders is influenced by Middle Eastern folk tales, do you have a favorite Arabian Nights translation or tale?

It’s too hard to choose one, here are my top six!
The Fisherman and the Djinni
Aladdin and his Wonderful Lamp
The Seven Voyages of Sinbad the Sailor
The Adventures of Bulukiya
The City of Brass
The Ebony Horse

Usually when I finish a 400 page middle grade novel I can't help but think it could've been shorter. Though that wasn't the case here thestory moves at a great pace and every scene serves a purpose.

When you started writing did you have guesses as to the length of the story?

Doret, I have to agree with you and say that I feel on average middle grade novels could do with being a bit shorter.

I know Harry Potter was a game changing when it came to length forthis age group but it is still worth thinking about the reading stamina of the younger readers in the middle grade bracket.

However, the writing mind says one thing and the writing heart another. As hard as I tried this is the length that this story came out and I barely give Zardi and Rhidan a break the whole way through.

For book 2, which is provisionally called The Spell Scrolls and will be out in 2013, I am hoping to make the story a bit shorter but the characters do still seem to find themselves in a pickle!

I really like the cover. It’s a great reflection of the story within and I think it will appeal to boys and girls.

Who is the cover artist?

I adore the cover as well. Jeff Nentrup is the artist. His work is gorgeous and I count myself very lucky to have had him as the artist for my book.

One of my favorite things about Book of Wonders is its visual appeal,especially when Zardi is armed with her weapon of choice a bow and arrow. Did you have an opportunity to take any archery lessons?

I didn’t take any archery lessons but I did read archery books. I do think though it is important to try and experience some of the physical challenges you put your characters through. So I tried practising jumping from rampart to rampart in Morocco above a ragingse but I got scared so I had to come down again immediately! My boyfriend did it for me instead and I then got him to describe how it felt. I did better when I was on holiday in Thailand and handled a pretty big snake. That experience was invaluable as I came to understand a bit more about the texture and movement of snakes. 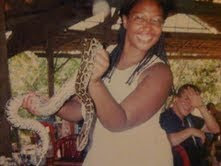 That's so cool that you got to visit Morocco and Thailand for "research". That's a pretty big snake, though compared to the many snakes Zardi and Rhidan faced it would probably be considered small.

Do you plan to publish The Books of Wonders in the UK?

I live in the UK and so I’m super keen to have this book available over here. At the moment publishers are considering it and so we’llsee what happens!

Can you tell us a little about your upcoming Skype tour?

It’s still in the very early stages of being organized but I am keen to try and visit as many schools in the US as possible. Because I live in the UK the only way I can really do this is via Skype. If you area school or library or bookshop that would like to host a visit I am available for free Skype Chats. I can talk more about what it is like to be an author and offer some writing tips and exercises. I think it could be a lot of fun, although undoubtedly there will be some hiccups! But if anyone out there is up for giving it a go, then so am I. Visit my website more details.

This next two questions are shamefully off topic. What three American actors/actresses do you believe have the best and worst British accents?

The worst would be Dick Van Dyke in Mary Poppins, Don Cheadle’s accent in Oceans 11 was pretty awful, and Anne Hathaway’s Sheffield accent in One Day was dire.

I must say though that their British accents are far better than my American one which one American friend has described as a strangled valley girl – charming!

What did you think of Meryl Steep's accent as Margaret Thatcher in The Iron Lady?

Jasmine thanks for humoring on those last two questions.Congratulations on a wonderful debut. I look forwarding to reading more of Zardi and Rhidan's adventures in The Spell Scrolls or by any other name.

Thanks so much for having me on your blog Doret, I had a blast.
Posted by Doret at 9:25 AM

Thanks for the interview. This is a book I would've never found without blogs, etc.

Great interview! The Book of Wonders sounds fantastic, and I have to agree about Anne Hathaway's accent.

This book looks so good! I love the cover - usually I don't read book reviews, but the cover caught me! (And the title!) Is that shallow or what??

What a great interview! Yet more confirmation that I need to read this one, soon.

Love the author talky-talk! I'm with you on never being able to limit my favorites to one!

Oh! Oh! Oh! The Book of Wonders has been in my queue for some time now. After reading Jasmine Richard's interview, I want to move it to the top of the list. She sounds positively charming.

great interview - I love that bit about the writing mind vs. the writing heart. Doret, you're awesome!
Namaste,
Lee