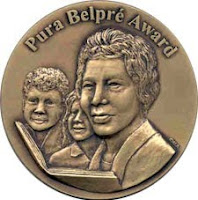 Ayer, I looked at the illustrator half of the Pura Belpre Award. Today it's all about the Narrative. As with the CSK award, its not age specific, as long as a book fits the criteria its eligible.
The award is named after Pura Belpré, the first Latina librarian at the New York Public Library. The Pura Belpré Award, established in 1996, is presented annually to a Latino/Latina writer and illustrator whose work best portrays, affirms, and celebrates the Latino cultural experience in an outstanding work of literature for children and youth. It is co-sponsored by the Association for Library Service to Children (ALSC), a division of the American Library Association (ALA), and REFORMA, the National Association to Promote Library and Information Services to Latinos and the Spanish-Speaking, an ALA affiliate.

There were 17 Latino authors published in 2011. I've included the nine titles I believe are eligible along with the the four picture books. Unfortunately I had to leave off the picture books I haven't read. (with one exception) Since online spreads allowed me to see illustrations but not enough text to make an educated guess on narrative.

Waiting for the Biblioburro by Monica Brown illus. by John Parra
Diego Rivera: His World and Ours by Duncan Tonatiuh
The Cazuela That the Farm Maiden Stirred by Samantha R. Vamos illus. by Rafeal Lopez
Pablo Neruda by Monica Brown illus. by Julie Paschkis
Tia Isa Wants a Car by Meg Medina illus. by Claudio Munoz
SkateFate by Juan Felipe Herrera
Hurricane Dancers by Margarita Engle
If I Could Fly by Judith Ortiz Cofer
Tomas and the Magic Race Cars by Ramon Mesa Ledesma
Dancing Home by Alma Flor Ada and Gabriel M. Zubizarreta
Under the Mesquite by Guadalupe Garcia Mccall
How Tia Lola Ended Up Starting Over by Julia Alvarez
Maximilian and the Mystery of the Guardian Angel by Xavier Garza

There were a lot of verse novels published in 2011 and that's confirmed by this small sample of novels. Four out the nine on this list are in verse form. (Herrera, Engle, Cofer and Mccall)

Skatefate - unfortunately the verse style of this one didn't capture me.
How Tia Lola Ended Up Starting Over - This is a fun series and I always look forward to the next one. Alvarez won the narrative award in 2010 for Return to Sender (loved it) and she will win it again in the future her writing is too good not to.
Maximilian and the Mystery of the Guardian Angel - I haven't read this one but from the summary it sounds like a fun story.
Tomas and the Magic Race Cars - For this one I read the excerpt and it was more than enough to get a feel for the writing. It was good but there are simply too many strong contenders this year.
Dancing Home - I really enjoyed this one. Maybe the fact that the committee will have to read four verse novels will work in favor of Dancing Home. The authors have a new book coming out in July called Love, Amalia, I love the cover.

Hurricane Dancers is classic Engle, and past committee's have responded well to her style.

Under the Mesquite - This was my favorite novel in verse last year . It received a starred kirkus review and was named a Best Teen Book of 2011. It's also a 2012 Morris Award finalist.

Waiting for the Biblioburro - I really enjoyed the text of this one. The story had a wonderful arc and it was just fun.

Diego Rivera: His World and Ours - There are a lot of strong contenders this year but I am pulling for this to get a honor. There are a lot of children's bios on Diego Rivera but I really liked how was still able to make this one stand out textually. And loved all the extra info in the back.

The Cazuela That the Farm Maiden Stirred - Vamos non tradional approach to a bilingual story was so smart and very good.

Pablo Neruda - The text has a great rhythm it was very poetry -esque, a wonderful way to remember a poet.

Tia Isa Wants a Car - This is my one expection. From the little I've read so far the text is beautiful and musical. I could easily see this one getting an honor, and I'd be more than okay with that.

Who I think will honor - Samantha R. Vamos for The Cazuela That the Farm Maiden Stirred, Alma Flor Ada for Dancing Home, Monica Brown for Waiting for the Biblioburro

Who I want to honor - Alma Flor Ada for Dancing Home, Duncan Tonatiuh for Diego Rivera: His World and Ours, Monica Brown for Waiting for the Biblioburro
Posted by Doret at 9:00 AM

What a great post - I wonder if this is the usual size for the field of contenders? I have so much love for Hurricane Dancers and Waiting for the Biblioburro.

Very nice overview, with lots to explore and think about.

I'm always happy for the Pura Belpre to get more press! I want to go buy up the picture books for our Liam Miguel, who loves to read more every day.

Loved this post. The awards next week are such a permanent boost to wonderful titles, but sometimes it's only a micron of difference between winning and not winning (I won't say losing). Attention like yours to those also-rans builds an audience that may keep them in print over time.
Ditto for your list for consideration for the Coretta Scott King award.
I'd like to link to these posts in my next post.

My heart and vote both go to Rafael Lopez for his amazing illustrations in The Cazuela That the Farm Maiden Stirred.

Thanks so much for this wonderful post. The Pura Belpre award deserves recognition and publicizing. And thanks for your nice comments on my book Dancing Home and your good wishes. I'm delighted that the award went to Under the Mesquite. I was able to read the novel before it was published and very pleased to write a blurb showing my appreciation of it. Awards can be very helpful in an author's career, so it is wonderful when an author's first book receives and award, particularly a young Latina. I trust this recognition will mean a great deal to the author both as an inspiration to keep on writing and a support on continuing to get published. All my best wishes to everyone who reads these words. www.almaflorada.com