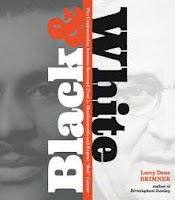 Black&White by Larry Dane Brimner
In Brimner's latest non fiction book for young readers, he explores the confrontation between Rev. Fred L. Shuttlesworth and Eugene "Bull" Connor, in Birmingham, Alabama during the 1950's and 60's. To grab the readers attention, the author begins by mentioning the first time the KKK tired to kill Rev. Fred L. Shuttlesworth. From there Brimner gives the reader more background information from both men, starting with Rev. Shuttlesworth.

This is a wonderfully through introduction for any young reader unfamiliar with Birmingham's awful history of race relations. I appreciated that the author did not shy away from Birmingham's nickname of Bombingham. It's visually appealing with black and white photographs throughout, and some memorable quotes from both men can be found in bold on the sidebar.

"We nicknamed him (the judge) Injunctionitis Jones." remembered Fred. He issued so many injunctions against the NAACP and the black struggle that many Negroes believed white "officials could ask Jones to issue an injunction against the sunshine and he would do it.

Black&White is written in an engaging matter to hold readers attention. It also takes a closer look at two men who played a very important role in Birmingham's race relations, making it a standout amongst many of the other books about the civil rights era.

Black&White is well researched and sourced. Several pages of back matter are included. The book has recieved two starred reviews - Kirkus and Booklist