Grandma's Chocolate/ElChocolate De Abuelita by Mara Price illus by Lisa Fields. This looks like a fun picture book. I will be checking out some of the stops on the blog tour, which begins on the 16th @ On Beyond Words & Pictures

Of Thee I Sing: A Letter to My Daughters by President Barack Obama illus. Loren Long

Sugar Changed the World : A Story of Magic, Spice, Slavery and Freedom by Aronson & Budhos - I've only had a change to flip through this but it looks amazing. This is definitely one of those not just for teens non fiction reads.

Edgar Allan's Official Crime Investigation Notebook by Mary Amato - Edgar Allan is trying to find the person who kidnapped the classroom fish before his rival Patrick Chen. I am only a few pages in but so far a very fun middle grade novel.

Blank Confession by Pete Hautman - The story alternates between to characters, one is Mikey who is biracial. His mother is Haitian and his father is Italian. This book was so good. Review to come.

The Boy from IIysies by Pearl North - I missed this one last week. Its the next book in the Libyrinth which I really enjoyed.

Behemoth by Scott Westerfeld - The main characters are White, the book is making the list because the author doesn't embraces diversity in the world he's placed his characters and with his secondary characters. I loved Behemoth, so I am very happy I was able to add it to the list.

"We split off from those cretins years ago. They think that only Turks are true Ottomans. But as you can see, the Committe takes in all kinds." He gestured at the other two men. "My friends are Vlachs, I am Armenian, and we have Kurds, Arabs and Jews among us. And plenty of Turks of course."

With the year coming to an end, the On Sale Now feature will get shorter and shorter. I decided to add on Mark Your Calenders, highlighting one or two new releases. So I don't list too many, the upcoming releases must tie in to one of the featured on sale now titles some how. Last week was the first time included Mark Your Calenders, just naming 2 upcoming 2011 releases. 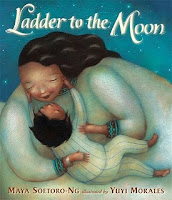 Maya Soetore-Ng is President Obama's half sister. This book is not scheduled to be released until April, but its illustrated by Morales, and looks gorgeous, so I am putting it on your radar early.

Ari has a list going of 2011 MG/YA authors of color. So far there are only 10 authors. If you know of any debut authors of color, please leave their name in Ari' comment box.