Later this week I will run my regular feature of new releases that feature characters of color or a diverse cast, though today I just wanted to point out two.

It Jes Happened : When Bill Traylor Started to Draw by Don Tate illus. by R Gregory Christie. Tate is a children's illustrator, and this is his author debut. I find it fitting that a visual artist would stretch themselves artistically and write a biography on a visual artist. I am looking forward to reading this one. Publishers Weekly review
Starred Kirkus review 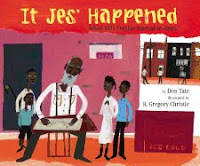 The Chaos by Nalo Hopkinson. I love the cover and I am super excited about Hopkinson's first YA novel (she's an award winning adult author) The book has received a starred Kirkus review and a starred Publishers Weekly review

In February CBC Diversity committee was formed. The members are primarily editors from various publishing houses.

The CBC Diversity Committee is dedicated to increasing the diversity of voices and experiences contributing to children’s literature. To create this change, the Committee strives to build awareness that the nature of our society must be represented within the children’s publishing industry.

We endeavor to encourage diversity of race, gender, geographical origin, sexual orientation, and class among both the creators of and the topics addressed by children’s literature. We strive for a more diverse range of employees working within the industry, of authors and illustrators creating inspiring content, and of characters depicted in children’s literature.

Anything that gets people talking or thinking about multicultural fiction is a good thing. Speaking of diversity, Edi did a wonderful post called trending in color last week. I thought her observations were right on point.

1.The Whole Story of Half a Girl by Veera Hiranandani - Two starred reviews - Publishers Weekly and Kirkus.

Including It Jes Happened by Tate and The Chaos by Hopkinson's that's nine* books so far by authors of color with at least one starred review.


*Figured I'd cover myself up front for the titles I missed
Posted by Doret at 10:05 AM

I just read about The Chaos today. It sounds unique and exciting! I haven't read Hopkinson's adult lit, but Midnight Robber sounds amazing (and I love the cover art too! bonus!). Anything illustrated by R. Gregory Christie is always a draw for me. Interesting that Tate wrote but did not illustrate his work - interesting in a good way. Thanks for highlighting these!

The Mighty MIss Malone is a fabulous MG read. I reviewed it at LIterary Lunchbox.
http://literarylunchbox.blogspot.com/2012/02/mighty-miss-malone.html

The Whole Story of Half a Girl is next in my TBR pile.

The Chaos sounds intense! I'll look out for it.

I'm thrilled to see a new book by Nalo Hopkinson. I love her books!