I discovered Jack Ferraiolo's first novel by chance. It was one of those pass-a-book-by-an-author-who-I’ve-never-heard-of-but-I-can't-help-but-stop moments, and I was right to stop. I loved The Big Splash, the author's 2008 debut. When I found out Ferraiolo had a new book coming out this year I was very excited. I wanted to know more about the author but asking a lot of questions could be weird unless its an interview.

Hi, Ferraiolo and welcome. Please tell us a little about yourself and Sidekicks?

I grew up in Southern Connecticut (which gives mea bit of a split personality, since Connecticut is New England as interpreted by New York). I now live in Massachusetts with my wife and two kids, where I write and develop animated tv shows. I co-created the PBS show WordGirl, and won an Emmy for being the head writer for the first season

As for Sidekicks…well, that’s kind of my love letter comic books. I LOVED Batman as a kid. Loved him. I had the plastic Batman Halloween costume (with utility belt!!!),and I wore that sucker out. It was a little embarrassing when I started to outgrow the size requirements (I looked like a miniature, over-the-hill, maybe-you-should-hit-the-gym-a-little-more version of Batman), but I didn’t care. I was Batman!!

As for Robin… well…as he got a little older in the seventies (DC even sent him to college), the little, green bikini briefs no longer seemed appropriate. Even as a ten-year-old, I always wondered if he felt a little—oh I don’t know – exposed…running around the city, trying to catch thieves and murderers in nothing more than a pair of green jockey shorts.

Which leads us to Sidekicks…

It's the story of Scott Hutchinson, a.k.a. Bright Boy, sidekick to New York City’s own superhero, the dark and mysterious Phantom Justice. Bright Boy has one major problem at the moment: He’s been Bright Boy since he was eight years old. He’s now thirteen, and still forced to wear the same costume – little, red cape and bright yellow tights (with bright orange accents). These tights leave very little to the imagination. When Bright Boy saves a very attractive woman from falling off the side of a building, he loses a very embarrassing battle to puberty…

How do you think working in animated television influenced your writing books for young readers?

It influenced me in a huge way…in a sense that if I hadn’t been writing for tv, and I hadn’t actually finished writing something (and seen it actually get made), I might never have even started a book. The thing is, I never really wanted to be a writer growing up. I was a reluctant reader/writer who couldn’t sit in a chair long enough to finish reading or writing something (unless it was a comic book…or The Great Brain series….loved those…)

I never consider writing for kids any different than writing for adults; my voice and sensibility remain the same. I always try to amuse myself first(as I feel like my sensibility hasn’t changed all that much from when I was a kid…I just have less hair…)

Pre teen boy, yellow tights, close contact to an attractive women. Bright Boy's embarrassing moment caught on tape was inevitable yet I didn't see it coming since there aren't a lot of YA novels that broach the subject of preteen male hormonal excitement.

Why do you think that is?

It’s an odd, little gray area…if not handled correctly, it can become like a scene from one of those bad 80’s movies (like “Losin’ It!”). There’s a belief, I think, that it’s somehow “sexualizes” a moment, and if handled improperly, it can be verrrry inappropriate (especially when you consider the ages of the characters). But speaking as a “survivor” of such incidents, “preteen male hormonal excitement” is as normal as breathing. It’s going to happen (usually at the worst possible time), and there’s absolutely nothing you can do to stop it.

Sex isn’t really the point…it’s that feeling of a lack of control over your own body. It’s mortifying. The only thing on your mind at that moment is, “How do I stop this?!?” even though you know there’s absolutely nothing you can do. That’s the truth of the situation. But again, if handled improperly it can become doofy and slapstick… or worse, suggestive in all the wrong ways.

There are some very funny scenes in Sidekicks from the hero/ villian scripted banter, to Phantom Justice taking himself too seriously. I laughed out loud a lot.

There's a fine line between funny and just a bit over the top.When writing for laughs how do you know when to say enough?

Well, everyone has a different line. It’s all about personal taste, and how that gets translated through tone and voice. I have a certain comic sensibility… I tend to err on the side of subtlety (some people call it “dry”… Others may call it “not funny”). I’d rather a joke not go far enough than go too far and wear out its welcome. I know what I find funny, and what I roll my eyes at, and I learned from watching a lot of movies. Early Mel Brooks, Airplane!, Police Squad/NakedGun… It also helps having a few people you trust give your stuff a read-through…

Sidekicks has a lot of boy appeal, it's funny and action filled. And you easily slip in a love interest and a little romance like a ninja without wanting to make your core audience say eww.

How did you make that work?

I’m not sure Sidekicks isn’t going to make the audience say eww… Look, they can deny it all they want, but most boys are romantics at heart. Look at comic books, movies,books geared towards boys…Guys want to be the hero…but not only that, they want that awesome girl from school to SEE them be a hero. Even better, they’d like to save that awesome girl from certain doom, and then have that awesome girl pine for them. If that isn’t one of the top-ten boy fantasies, then Spider-man wouldn’t have made a kajillion dollars…

One thing I loved, the It girl had some slick moves of her own and didn't have to be saved. 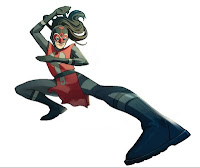 I love cover. It was interesting to read Chad W. Beckerman, talk about the process of developing the cover for Sidekicks.

Are you kept in the cover loop?

I am. Chad Beckerman (the art director at Amulet) is awesome at keeping me involved in the process. But ultimately, it’s his vision, hard work (and the work of the talented artists he picks…Greg Horn for The Big Splash paperback cover; Joshua Middleton for the Sidekick cover) that produces the results…

Do you plan on writing a sequel to Big Splash?

Editing my first draft right now! It’s called The Quick Fix and it’s coming out in the fall of 2012

What are some of your favorite comic books?

Oh man…I’ll try to keep it brief … Watchmen and The Dark Knight Returns, of course.Batman: Year One. The New Teen Titans: The Judas Contract, Daredevil: Born Again,Some of the new JLA stuff, Joss Whedon had a great, limited run on X-men. Grant Morrison’s Batman run has been great. The Walking Dead series. I loved James O’Barr’s The Crow series. Marvels by Alex Ross. Anything by Brian K.Vaughan (no surprise there…) Love the classic Avengers stuff, and LOVE the whole Marvel “What if…” series (old and new). I can pretty much pick up any comic, starring any character,and get sucked in…I’m a sucker that way…

Jack thanks so much for your time and another great novel. I will be on the look out for The Quick Fix in 2012.

Be sure to check out the other SBBT Day 1 interviews

I think I'll have to read this. If nothing else, for the pre-teen hormonal excitement scene. That's one perk of being female--not having arousal that declares itself so plainly.

Jack, I like how you pointed out that the real issue is a body doing its own thing.

That's the smart way to approach "tricky" issues for different audiences: what does this mean for folks at my readers' stage of life?

Middle school was awkard enough happy I didn't have to deal with this.

Hahahah! Ditto what Ashley said. I want to know what happens!!!

I wish more authors would understand that boys DO like romance books. They just want it snuck into an action book, so I did really like this. I wonder-- are there any romance books for men? It seems like that is 75% of the fiction for adult women!

Thanks for taking the time to talk about this, I feel strongly about it and I benefit from learning about this topic. Please, as you gain facts, please add to this blog with new information. I have found it extremely useful