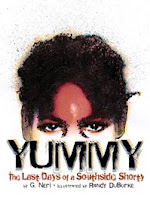 Yummy by G. Neri. illus. by Randy DuBurke
This is the true story of 11 yr old Robert "Yummy" Sandifer, last days. In 1994, while shooting at a rival Chicago gang, Yummy killed a girl in the neighborhood. Yummy went on the run. This story was national news. The Time Magazine article via the author's site.

"The mayor of Chicago admitted that Yummy had slipped through the cracks. Just what cracks were those? The sharp crevices that trap children and break them into cruel little pieces. Chicago's authorities had known about Yummy for years. He was born to a teenage addict mother and a father now in jail. As a baby he was burned and beaten. As a student he often missed more days of school than he attended. As a ripening thug he shuttled between homes and detention centers and the safe houses maintained by his gang. The police arrested him again and again and again; but the most they could do under Illinois law was put him on probation. Thirteen local juvenile homes wouldn't take him because he was too young. "

Neri uses, Roger a ficitional narrator to guide us through Yummy's last days. 11 yr old Roger wants to understand how a classmate's life could've gone so wrong. In his search for answers we see many sides of Yummy. There is the young boy who loved sweets. (hence the nickname) The boy who stole cars and ran the streets. The boy who had a teddy bear in Juvenile detention. And finally the boy who after three days of hiding from the police, all he wanted to do was go home.

Guns drugs and violence are talked about throughout. Neri doesn't glamorize or down play the gang activity, he simply tells it as is. Neri's fictional narrator isn't impressed by gangs. Roger, actually worries about his older brother who was in the gang Yummy joined.

This graphic novel is very well crafted. DuBurke's illustrations add another dimension to this biography. Neri and DuBurke capture the powerful and sad truth of Yummy's life and death in Southside Chicago. I found myself lingering on many of the passages and panels. I loved it. Ages 11up

Yummy has received a star review from Kirkus Reviews and ALA Booklist. Read a preview and the professionals reviews via publisher's site.

On Sunday, I will be posting the second part of a three part blogger interview with G. Neri on Yummy. I joined with Edi from Crazy Quilts and Ari from Reading in Color.

Part one can be found at Crazy Quilts

Check out this rap by Solution about Yummy

This looks like a good one for my school's library and I liked Surf Mules by Greg Neri. Thank you for the review!

I came across this one a few weeks ago, and I immediately began searching online for information about Yummy's sad story. Thanks for the review; I will definitely be purchasing a copy.

Helen and Shalonda, I think you will both have a hard time keeping Yummy in stock.