So I've been able to read many of the books that were on my Mark Your Calenders post back in January. I just wanted to take a moment to mention some recently released books on that list. I don't know when I will get a chance to read any of these. (hopefully sooner than later) but I figured the least I could do was highlight them. When I was able to I was able to I've linked to reviews and excerpts.

From the excerpt alone, this biography look like a serious TKO. I thought Smith and Evans would create an amazing book, but I am still blown away by the little I've seen. Looking forward to getting my hands on this one. The book received starred review from publishers weekly and school library. 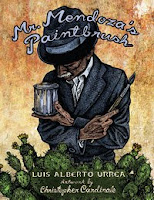 The cover looks gorgeous and the story sounds great

"Be careful growing up in the green, wet, mango-sweet Mexican village of Rosario, where dead corpses rise up out of the cathedral walls during July when it always floods; where vast silver mines beneath the town occasionally collapse causing a whole section of the village to drop out of sight; where a man with a paintbrush, to wit Mr. Mendoza, is the town’s self-appointed conscience."
Mr. Mendoza's Paintbrush recieved a five star Kirkus Review

I thought it would be nice to read a non fiction book on an American Indian journey by an actual American Indian. I read Tingle's Crossing Bok Chitto this year and love it. It made me want to read Saltypie even more, as did
Deebie Reese's glowing review of Tingle's Saltypie. Read an excerpt
The Other Half of My Heart by Sundee T. Frazier.

I really like the excerpt, the writing looks like something I could really lose myself in. This is Frazier's second middle grade novel. Her debut novel Brendan Buckley's Universe and Everything in it, was awarded the Coretta Scott King John Steptoe award for new talent in 2008

I've been hearing very good things about this one. After reading and loving Secret Keeper by Perkins last year, I am not surprised. Check out a few reviews and read an excerpt
Posted by Doret at 1:12 PM