Today is July 4 Independence Day in the United States. I always have a hard time getting excited about this holiday, since Blacks were still slaves in 1776. For some reason I decided to make myself feel even better and read a little of Susan Campbell Bartoletti's upcoming release - They Called Themselves the kkk When I requested an arc I couldn't bring myself to capitolize the k's and I still can't. The book is fact filled and very readable. I love the extensive bibliography and source notes. The book will be released in August.

Sometimes when I see an issue being discussed at other blogs, I assume others have already heard about it, and I fail to mention it. I am going to try to stop doing that.

On July 1, Jodie talked about another case of Whitewashing a young adult cover. This time it's the paperback of Cindy Pon's The Silver Phoenix . A few other post to check out on this issue Jeannie Lin's , Ari's @ Reading in Color and Tarie's @ Asia in the Heart, World on my Mind

I really liked The Silver Phoenix. However I don't think the cover did it justice. And I said so in my review.

The cover doesn't do the book enough justice. I read Silver Phoenix because I kept reading great reviews about the book. If not for those reviews, I would have missed a great read. The cover simply doesn't entice me. There are two strong male progatonist in the novel, but neither are featured on the cover. Not putting at least one of the male leads on the cover limits the audience.

Two cover's I would have liked better

The three travel most of the way by foot. There is one horse which Ai Lang rides.
Cover option 1- Ai Lang on the horse (dagger visible) with Chen Yong and Li Rong on either side of her (swords visible)

At one point the three must ride a dragon together.

Cover option 2- The three riding a dragon Ai Lang is holding onto the dragon, Chen Yong holds onto Ai Lang, and Li Rong holds onto Chen Yong. When I read that scene I thought it worked very well visually and would make a great cover. Weapons showing of course. There's something about weapons that always makes me pause, unless I am on the street, then I run.

What if Ai Lang was holding a dagger on the cover. What if people passed on Silver Phoenix not because there was an Asian girl featured on cover but because it fails to convey the strength of the female protagonist, or the action within the story. Now we will never know.

I have my fingers crossed that publishers will not start to think Whitewashing middle grade and young adult covers is the way to go if they want a little attention.

The Last Airbender movie was released on Thursday. The movie was adapted from a very popular Nickelodeon cartoon series. On the show the main characters are Asian, however White actors were cast to play all the main parts except the villains. For a better understanding of this controversy check out this wonderful article by Q. Le. on the history of facepainting in Hollywood.

The reviewers have not been kind to The Last Airbender - Roger Ebert gave it a half a star Every time I think about how this movie was poorly casted, reading one of the many bad reviews or thinking about how much money this expensive movie won't be makes me feel much much better.

Q. Le, article got me thinking about when of my favorite biographies from last year Shining Star: The Anna May Wong Story by Paula Yoo and Lin Wang. 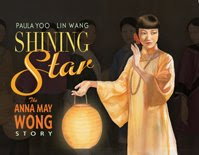 Anna May Wong was the first Asian movie star in Hollywood. Wong along with many other Asian actors were denied rolls in the 1937 film The Good Earth, about Chinese farmers.

If you were thinking about seeing The Last Airbender, I say don't waste your money on what sounds like a very bad movie. Consider buying a great biography instead.

Thanks so much for posting that video of Paula Yoo! :o)

I don't really get excited about this holiday either, because I loathe jingoism. But I like the fun facts, like how many hot dogs get eaten, and all that! And I wouldn't turn down a white cake with red and blue berries either. Otherwise, it's another Sunday for me!

Tarie - I really like that video, especially the glances of the book. Shining Star is a great bio/ I saw a chance to mention it again and took it.


Jill - you just reminded me I need to check to see who won the hot dog eating contest.