My Best of 09, A Preview of the Preview,+ An Overdue Apology

At first I wasn't going to do any Best of List but now I will. I am waiting until the end of December, early January to post. Books published in December deserve a chance to get on end of the year list. I will do a few categories.

I will also be doing a coming soon list. I had planned to go up to March maybe April, though I am already into August. I am stopping there. I got into a new month every time I found a new book by an author or illustrator of Color.

A Place Where Hurricanes Happen by Renee Watson Illus by Shadra Strickland doesn't come out until June. Look how beautiful it is, I had to include it. 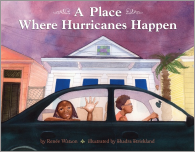 This will be Watson's first picture book. In 2009 Strickland became the first female illustrator to win the John Steptoe Award for new talent.

This are some great books coming out.

Sharon Flake has a new one at the end of February -
You Don't Even Know Me: Stories and Poems About Boys Flake is on my a read it as soon as it comes out list.

As is Melina Marchetta. Finnikin of the Rock comes out in early February

Zetta Elliott's YA novel A Wish After Midnight (loved it) which was originally self published is being released in February by Amazon Encore. I am very excited about this re-release - Elliott has written a great YA book that many people have embraced. Check out a few reviews.

This year author Rita Williams-Garcia was a National Book Award finalist for her YA novel, Jumped. (loved it) Check out her great guest post at Cynsations. Williams-Garcia has a middle grade novel coming out in January. One Crazy Summer . (loved it)

Monica Brown as a new picture book Chavela and the Magic Bubble that comes out in May. 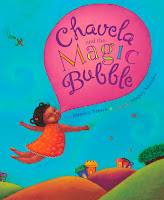 I believe this will be Brown's first non bilingual picture book. Earlier in the year I read, reviewed and loved Brown's Pele, King of Soccer/Pele, El rey del futbol. The author was kind enough to answer a few questions but I did not post the interview.

When I first saw Chavela and the Magic Bubble, after my initial thought of I owe Monica Brown an apology (I really am sorry), I thought beautiful cover and Brown must have an illustrator fairy. She has several picture books all illustrated by different artist. Their styles always match the text. I have never once looked at one of Monica Brown's books and thought if only it was illustrated by someone else.
Posted by Doret at 10:23 PM

Thanks for the shout-out, Doret! You were among the first to champion Wish, and look how far we've come! Did you get your two ARCs?

Hey Doret! I wasn't expecting to be on the list yet. Thanks for extending the date and including HURRICANES~

Yes, Zetta. The cover is even prettier in person.

Shadra, the cover is lovely. I can't wait to see what you and Watson have on the inside.

Oh noes! This is where I've seen this template before! Dang it! Don't worry I didn't mean to steal your look!

I am in the middle of (and loving) WISH, and just adore Shadra's work. Thanks for the great list -- these all look like must haves!

Can't say it enough: I'm so glad you're here. Thanks.