Over the past few years there have been several young adult non fiction books on the civil rights movements.  So even though We've Got A Job received three starred reviews, I let the galley sit on my ereader longer then I care to admit to. When I finally  started reading it, I quickly realized it stood out.
Today I have a pleasure of presenting an interview with the author, Cynthia Levinson for the Summer Blog Blast Tour

Hi, Cynthia, and welcome. Can you please tell us a little about We've Got A Job? And where the title derives from?

We’ve Got a Job: The 1963 Birmingham Children’s March tells the story of how 3,000 to 4,000 black school children protested and went to jail in order to desegregate Birmingham, Alabama, and save the Civil Rights Movement, which was in a decline. The book does so through the experiences and voices of four particular young people, each of whom represents a different aspect of the black community in Birmingham then. 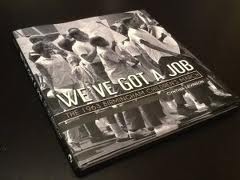 The title comes from a song, written by a teenager named Carlton Reese. He practiced it on the upright piano in the living room of one of these four children, Audrey Faye Hendricks, and it became her favorite civil rights song. Audrey’s father and many of her aunts and uncles sang in the Birmingham Movement for Human Rights Choir, which recorded an album titled “We’ve Got a Job.”

What is your preferred writing process, assembling the information first,or research has you write?

Although I did a tremendous amount of research before starting to write the book and even more while writing it, there’s no way that I know of to do all the research in advance. The two are inextricably intertwined and continually inform each other. In addition, inevitably, an editor will ask a question that leads to more investigations.

My editor at Peachtree, Kathy Landwehr, for instance, asked me an apparently simple question: who was the mayor of Birmingham in 1963? That question led to my reading most of a 700-page book about municipal politics in Alabama and interviewing the book’s author. It also led to my restructuring an entire chapter and working into the narrative an essential “sub-plot.” The story behind who was the mayor of Birmingham— there were two, who were suing each other for control!—turned out to explain, in part, why Dr. Martin Luther King, Jr. wrote his famous “Letter from Birmingham Jail.”

The four young people, We've Got  A Job is based around truly stood out. How did you find Audrey Hendricks, Wash Booker, Arnetta Streeter and James Stewart?

The Birmingham Civil Rights Institute (BCRI) has been conducting video interviews with local civil rights activists (and a few anti-civil rights activists) since the early 1980s. I read through dozens of transcripts of these interviews and “found” Audrey, James, and Wash that way. Audrey was practically a given because she was so young—nine years old when she spent a week in jail. More importantly, she was (sadly, she died three years ago) a lovely woman, who cared deeply about sharing her stories.

The first time I met Wash, on the first of my three research trips to Birmingham, I immediately knew he was a given, too, because he was both “a bad boy” and very candid about his exploits. And, James’s interview made him very appealing because, like Wash’s, his memories were very distinct and detailed. However, unlike Wash, he was a law-abiding A student. I could tell that they’d be great foils for each other. When I discovered that they were also friends, that was a bonus.

Arnetta came to me through an activist in Birmingham named Odessa Woolfolk. I had also met Odessa on my first trip there. She was very involved in the establishment of the BCRI and, before that, had been James’s Civics teacher. She was one of the few teachers at the time who encouraged the kids to play hooky from school, protest, and go to jail. So, I knew when she suggested that I talk with Arnetta that this would be a great source!

I am a stickler for well-cited non fiction and this is definitely that. You also have extensive back matter at the end, including a map of Birmingham's downtown district. How did you find a healthy balance between citing individuals involved in Birmingham's civil rights movement and your narrative?

Finding balance between individual, idiosyncratic experience, on the one hand, and background explanation is a good way to describe the process. Each person, because of her and his situation, gave me the opportunity to explore different aspects of the times and the place. For instance, because Audrey’s parents were very active in the Civil Rights Movement, I could write both about her and, simultaneously, about the history of the movement in Birmingham. Similarly, Arnetta’s experiences as a very light-skinned black person, let me write both about how she handled being “high yellow,” as other black kids labeled her skin tone, and about divisions within the black community. So, that balance developed organically.

The photographs speak volumes, giving a deeper understanding of racial divide and what Birmingham teens endured for change. Did you have a harder time editing the text or deciding which photos to include?

Both were hard! Editing the text was largely a matter of explaining background, deepening details, confirming facts, and adjusting nuances. The photos were not hard to find but many, including a number we could not use, were very costly. I spent a couple of days at the Library of Congress doing photo research, which was a great experience that resulted in wonderful visuals. I found many others at the BCRI, and my editor found a trove at the Birmingham Public Library. The photo research was more rushed, as, by the time we got to it, we were under deadlines. But, the entire process—the research, writing, editing, photos, all of it!—was, as Kathy said, a career highlight.

A non fiction book’s layout and visuals are essential components to making it appealing.
The simple cleanness of  We've Got A Job's layout allowed the black and white photographs to stand out even more. Did you have much say in the final over all look?

Peachtree asked my opinion several times about the design—for instance, the bars that separate the sub-sections, the look of the sidebars. But, they created the look, the layout of the pages, etc. And, I’m thrilled with what they produced. All of the reviews mention the design, and I give Peachtree all the credit.

Since you come from a family that gravitates towards nonfiction, what do you believe can be done to make young readers want seek out non fiction for the pure joy of it?

Stories trump all! I don’t think there is—or, should be—a way to “make” children read nonfiction. However, youngsters will naturally veer toward the truth if it’s conveyed through dramatic stories. Meira taught eighth grade  before becoming a university professor, and every chapter of her book opens with extended vignettes about her experiences with her students .

Sandy, too, relates stories; his tend to be political—about the ramifications for today of the US Constitution and the way it was written. Juicy or alarming tidbits—anything that makes readers say, “aha!”—keeps them involved and seeking more.

Terrific interview. Makes a compelling case for the balance of photographs and text to engage young readers. Well done!

Thanks for your comment, Cathy. As I told Doret, she made me look like I know what I'm doing! And, Peachtree did a beautiful job with the photos.