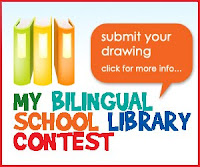 April 30th is the 15th anniversary of Children's Books Day/El Dia de los ninos (or simply Dia) At School Library Journal, I came across a great contest in honor of Dia.

"While our children are not yet school-aged, we’re aware of the huge need dual language elementary schools, schools with ELL programs and those that teach Spanish to their students at the elementary level have in terms of reading material in Spanish (or bilingual). We’ve heard from many teachers in these schools that they have such small budgets that they end up bringing their own bilingual or Spanish books to share with their students. We believe so strongly in the importance of literacy when raising bilingual children that we decided to help change this by stocking one bilingual school’s library with as many books as we could get.

To that end, we’ve joined forces with some of the major bilingual/Spanish publishing houses we’ve been working with in the last two years and they’ve graciously agreed to donate a total of $500 worth of books to ONE very lucky bilingual school library"

Accepting entries until May 8
Posted by Doret at 9:00 AM

thank you so much for posting this. I will send this on to my daughter's current school, which is a Spanish Bilingual Immersion School, as well as pass it along to her Middle School who will continue hosting the program through 8th grade, and of course her school from before...all of whom work earnestly to keep a good library of books. I will be excited to see more books that are not just translated works.

--can you tell that I am just plain excited to have seen this post?

This comment alone made posting this worth it. I hope your daughter's school or someone you know wins.